The first ever Mozilla South Asia community meet-up took place at beautiful Kathmandu, Nepal on 22-24th February 2013, with the coordination from Mozilla Nepal regional community. The meet-up brought together community leaders from the South Asia, including Gen Kanai, Director of Asia Community Engagement at Mozilla to meet for 3 days of presentations, breakout sessions and discussions to plan the implementation of the Mozilla South Asia community road map for 2013 and ensure that the regional community is aligned with greater engagement efforts across the Mozilla organization.

Background:
South Asia is a unique region with diverse cultures and with an immensely growing Mozilla community presence. The community members from the region were already cross-collaborating on projects like localization, community building, webmaker etc. Some of the challenges faced by the South Asia regional community were similar and thus the scope of working together is greater. There is this huge potential from the rapidly growing community that can grow positively if guided in right direction. Another major fact is the millions of internet users and the growing mass mobile market which makes the South Asia region a land of possibilities. This also makes it necessary for creating awareness on the open web and how it can impact in day to day life. 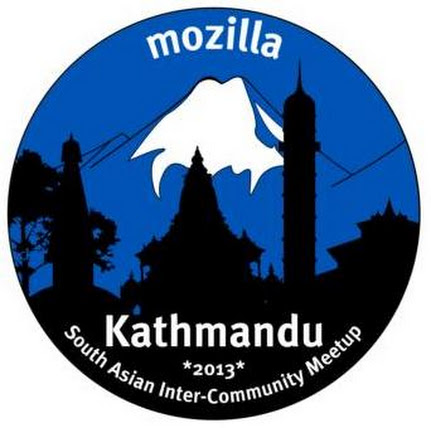 The idea of the south asia meet-up came up during the MozCamp Asia Singapore. From the very beginning, we kept the scope of the event around SAARC nations, to keep the event more focused for a specific region and avoid any blurred-boundary conditions. The objective of the three day meet was to help nurture, plan and motivate the regional communities to collaborate, develop and grow.

The aim of the workshop was to enable Mozilla communities in the South Asia region to share and learn from each other’s experience working on the Mozilla Project, improve collaboration in the future, and work on specific tasks.

The participating community members include from the regions:

Venue:
There were several reasons for choosing Kathmandu, Nepal as the venue.
* The Mozilla community in Nepal is new and actively growing. One of the challenge they were facing was letting people know the larger picture of the local community that it is part of the global community of Mozilla. Technology groups or people in Nepal did not take Mozilla regional community seriously and thought the team was acting on their own with out the cooperation of Mozilla.
* As part of SAARC understanding there is a visa on arrival for other SAARC nation citizens and Indians don’t required a visa to travel to Nepal.

We saw this meet-up as an opportunity to:

And of-course to have this milestone meet-up at the beautiful Kathmandu Valley.

Day 0:
On Friday evening we had a informal gathering to get to know each other(ice-breaking session). Later we had traditional Nepali style dinner with a live traditional dance show.Before going to sleep everyone was given a brief about what the next two days would be like and what to expect from the meet-up.

Day 1:
Day 1 had two main things: 1. Kick staring the meet-up in the morning and 2. Participate at the public event, ‘Open Data Day Nepal‘ in the afternoon. The day started with everyone joining for the group breakfast, Gen joined us at this time. It was amazing that most of us were meeting each other for the first time, even though it was like we know each other for a long time in the online world.

The official meeting started with introductions and each member answering 3 questions:

The introduction session was followed by individuals mentioning about what are the things working for them/their regional community and what are not. The notes from this session can be found here.

After lunch, we went to participate at the public event, Open Data Day. We travelled in a vintage VW bus. At the event we introduced various Mozilla projects to the audience. The Firefox OS topic had the most follow-up questions and many people were excited to see the test phones running Firefox OS. Rest of the evening we continued with brainstorming on ways to collaborate and improve the engagement efforts in the local communities. Day 2 was focused mainly on working on getting solutions to the problems and challenges that were discussed during the past two days and summarize the meet-up. We divided into teams regional community wise and made a list of whats working and whats not working. Several important issues and concerns were raised during the discussion. To tackle the things project area wise, we came-up with the proposal of having task force teams. Each task force team is responsible for a project area and has a set of contributors and mentors with-in it. Everyone at the meet-up were asked to self-assign a task so that each one of us has some goal to work towards and target to achieve. Here is the list of the Task Force team formed at the meet-up. Once tasks force teams were formed, each task force team had their part of the independent discussion and chalked out tentative road map for the coming few months. This discussion was productive and was a major outcome of the event. A wiki page is created to maintain a list of contributors and document the Task Force Team activities.

As this was the first ever meet–up, there is a large room for improvement and to make best use of such gatherings. Overall the meet-up was a great success and productive.

This meet-up would have not possible without the efforts of the Mozilla Nepal community and their dedication to make it happen. Also great thanks to everyone who have taken time to participate at the meet-up and added value to it. Thank you William Quiviger, Michelle Thorne(hope to have you next time!) and Soumya Deb for coordinating with the event. Many thanks to Gen Kanai for his continuous support to the community initiatives in the region. A note to community members from Asia: Gen Kanai is here to support us.

Personally the Mozilla South Asia meet up and Kathmandu trip will remain special to me. Learned a lot from the neighbour community. One thing that surprised me at Kathmandu was, the whole city goes to sleep by 9.00 PM, after that time all the roads look deserted. They also wake-up very early, the community members from Nepal use to attend their college, write their assignments and join us for breakfast!! Also, It was the first time that I visited a country where no visa/ documentation is required, wish the whole world is this free to travel.

The meet-up opened several oppertunities and we are thrilled to work together upon them in the coming days. Stay tuned for more action!

Update:
As a result of this meet-up our first ever knowledge sharing/ offline collaboration happened as part of the Firefox OS App Days Kolkata. Community members from Nepal, Bangladesh and Sri Lanka were invited to participate at the event and Robin from Bangladesh and Avinash from Nepal joined us for the hackathon. The event went great and you can read more about it here, here and here. The fun fact was:
Robin was a international traveler and needed visa to join this event. His flight journey is 40 minutes.
Avinash was a international traveler who did not needed a visa and his flight journey time was 60 minutes.I’m a domestic traveler and the flight journy is 120 minutes and for Soumya, also a domestic traveler, its 4 hours.