Below is the brief summary of the Mozilla activities that took place during GNUnify’13 over a course of 3 days(February 15-17th) at SICSR, Pune. The idea was to target 3 major events at a time. 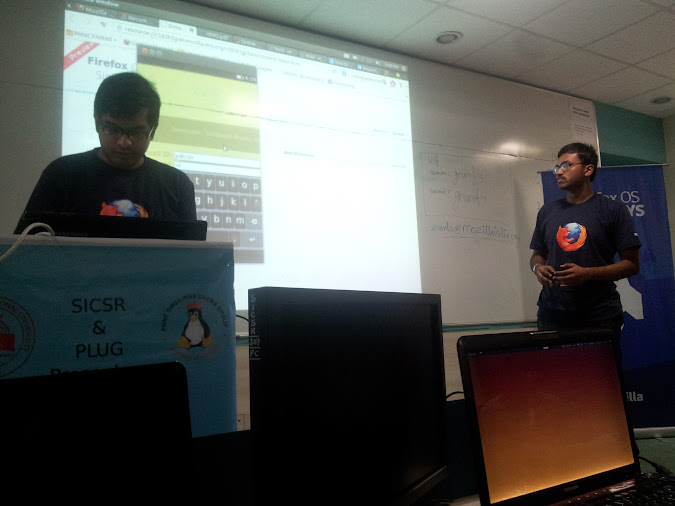 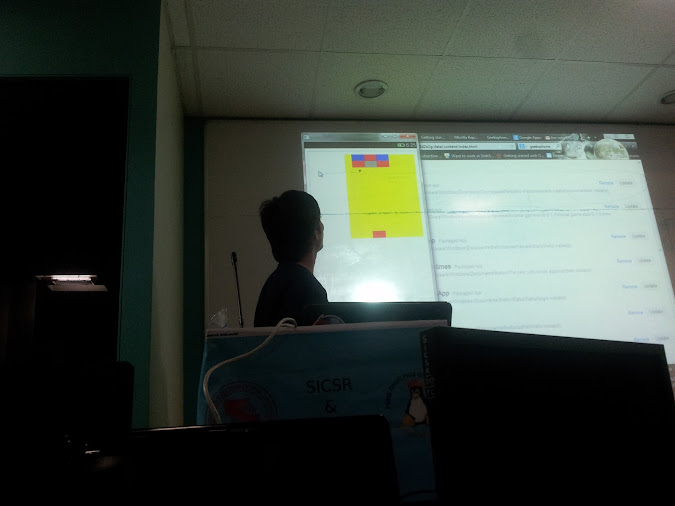 2. Mozilla participation at GNUnify’13:
GNUnify’13 is the annual open source event organized by SICSR, Pune. Open source enthusiasts from across India attend/speak at this event. Background: Organizations like Wikimedia, Creative Commons, Drupal and Mozilla have been participating for the last several years at this event. Last year for GNUnify’12, Mozilla staff, Gen Kanai & Arky joined us for the event. Mozilla was the official sponsor at GNUnify’13. The event host, SICSR university has been the backbone for our local Mozilla community in Pune(half the reps from Pune are from this college) by supporting with the Mozilla events year round by providing facilities like conference hall with audio/ video equipment, computer labs and internet to host workshops and meet-ups. Sayak(Mozilla intern-Jan 2013, Mozilla rep), Faisal(Active Localizer, Mozilla Rep), Sara Khan(WoMoz, Mozilla Rep) and many other were recruited as volunteers at GNUnify 2012. Sayak giving a talk on Webmaker initiative
Wikipedia, Creative Commons, Drupal, OpenStack, KDE and various other open source organizations and its community participated this time. We had separate Mozilla track for full day for all the 3 days. 7 Mozilla Reps gave talks this time:

The second India Inter-community meet-up took place at Pune during the time of GNUnify’13 at SICSR Campus on 16th and 17th February 2013. The first meet-up took place in 2012 during GNUnify’12 at the same venue. One of the reasons we’ve selected Pune as the venue is, number of our key localizers and Mozilla reps are based in Pune. This was a special event for our regional community and will remain a important milestone as we move forward.

The goal of this meet-up was gather the India community together to share, discuss and brainstorm on various topics related to Mozilla community in India. The objectives of the meet-up include:

Anyone who is active in the Mozilla India community was welcome to join this event. 34 community members from across India participated in the meet-up, that include Mozilla India active and core contributors(localization team, developers, Mozilla reps & Student reps) and also members who are new to Mozilla community and are interested in getting involved.
Attendees for India Inter-Community Meet-up 2013:

We started the meet-up with ice-breaker session and tried to keep it informal. Members were asked one question – “How did you get-involved with Mozilla?” Below were the common answers:

Interestingly there was no reference to mozillaindia.org website. So our next topic of discussion was on Mozilla India website followed by what’s working and what is not working and ways to improve the regional community. Some of the things we identified and that should be improved/ changed ASAP:

Topics discussed at the meet-up(may not be in a order):

Day 1 of the meet-up session went longer than we planned, we realized that we covered a good part of the agenda already! The community members do a lot of hard work through out the year and the only time they get to meet the other community members is at occasions like these meet-ups. After the intense discussions and brainstorming, we went out to party. Harshad Gune(Board member of Open Source Initiative and GNUnify host) joined us for the dinner.

Day two of India Inter-community meet-up started at 10.00 AM. Everyone was given a pen, paper and asked to prepare for a short “Who am I” presentation, there were 4 questions:

Along that community members were asked to do a SWOT (Strengths, Weaknesses, Opportunities, and Threats) for Mozilla India in 15 minutes. The members were given a option of either sharing their SWOT publicly or they can just share it written on a paper if they want to give some anonymous feedback.
The ‘Who am I’ & SWOT session is video recoded and the same can be found at Mozilla India Youtube channel.

The next topic was to have a bold vision for Mozilla India, for 2013.

Statement with respect each project area:

One major outcome of this Inter-Community meet-up is having come-up with the Task Force Teams with respective owners and mentors to focus on respective areas of Mozilla in India. The model is a remix of the Mozilla Hispano community. The objective of the outcome is to make every contributor/ community member have a stake and sense of responsibility in the regional community – Mozilla India. The new roles and responsibilities are on meritocracy basis.

As of now nothing is set in stone, we’ll try things and based on the feedback we get, we’ll improve.The framework will undergo mandatory review every 6 months, possibly during physical community India meet-up. If you are an existing Mozilla contributor from India and wish to join any of the task force team, please write to: join at mozillaindia dot org.

The India Inter-community meet-up was productive, lots of discussion, covered several important topics and reached consensus on things. The regional community is all excited and has great plans. Get ready to witness the amazing activity in the coming days.

After the meet-up we went to dinner at a shopping mall, the food was great. Some of the members had to leave to catch the flight back. Those who were there, we went to the movie ‘Special 26’. We booked a whole row in the theatre and Fredy sat in the middle seat, everyone translated the movie to him! Can’t tell how awesome it is to spend time with the Mozilla community! Thanks Fredy for coming all the way to help with the event!